Designing the classroom of the future

‘Ons Middelbaar Onderwijs’ (‘Our Secondary Education’) was established in 1916 as an umbrella organization for secondary schools in the Dutch county of North Brabant. The schools offer education at most common Dutch levels. The guiding idea for OMO is to develop the talents of each student through “good education”.

In their own words: “You will exceed expectations by learning from and with each other and by creating space for all to live well together in society. That requires skills like collaboration, having a mind of your own, and problem solving. It is important to learn to understand and be open to other views and cultures. We give substance to this by educating the student based on our core values: good education, good citizenship, live good, and do good.”

Objective
Design the classroom of the future. Or rather: how can we best approach that challenge and can you teach us how to design and execute solutions that work. Education and school systems are constantly evolving. Schools are looking for new ways to deal with that, designing new spaces and new interiors is part of that quest.

Outcome
A deeper understanding of the impact of a classroom, the school building and interior design on students and the way they learn. During the project school staff was involved every step of the way; design thinking was introduced as a road map for continuous innovation.

‘Our Secondary Education’ (OSE) approached us with the question to design the classroom of the future. Education is constantly developing and changing: suitable education, customization, and on-going digitization are just a few of the developments. OSE’s focus always remains on giving students the best possible opportunities for their future.

All these developments create a need for different spaces and a different layout than the traditional classrooms with standard tables and chairs that most schools still use. And the real question was whether we could help them with a method to best tackle this. Within the dynamics of continuously changing education, one classroom of the future does not exist – it evolves.

So the challenge at hand was about dealing with change and how to translate that into an optimal design of school spaces. That challenge immediately made us jump with joy. After all, design is a process of skills you can master, especially if you tackle it as a team. And it was clear that we would work together with a motivated group of teachers from two of the affiliated schools.

Time to Reframe
In order to get to the heart of the challenge, we looked in different sessions for the question behind the question. Was it technological solutions or was it more important to focus on the additional challenges? For us, reframing the question is perhaps one of the most important steps in the process. Here we learn what the end-user has been running against for some time. 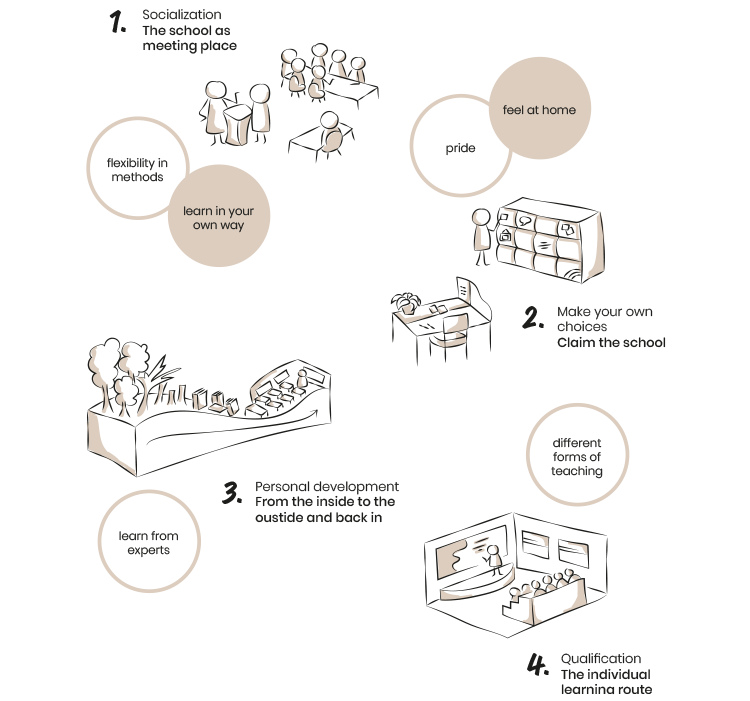 Essence of Education
As a first step, we investigated the team’s ambition and vision. We mapped out which topics are important in the school and for tomorrow’s classroom. It was expressly not about tables and chairs, it was about the essence of education. About working together, being able to focus, creating your ‘own’ school that works for you, shaping conditions to get the best out of yourself. It was about the school’s role in society and how to bring the outside world into the school. And also the other way around, bringing the school to the outside world and preparing students to become good citizens.

The Classroom of the Future. That may sound like science fiction, a vista. As something filled to the brim with technology and digital solutions. But of course, it doesn’t have to be that way. In fact, the classroom of the future may well be the Classroom of Tomorrow. Very practical and very near. Perhaps the challenge is predominantly about creating space where kids can learn, designing spaces that boost the natural learning process. It goes without saying that digitization, ICT, and media literacy are important subjects in any school’s curriculum. However, technology may not be the dominant factor in designing school spaces. During the conversations we had with the client about this, is became clear that technology is primarily a facilitating factor.

Cardboard Prototyping
Low-budget and quick testing helps to discover what you want to invest in the long term and if it is suitable for a larger scale investment. Prototyping leads to surprising insights, which you didn’t saw coming. 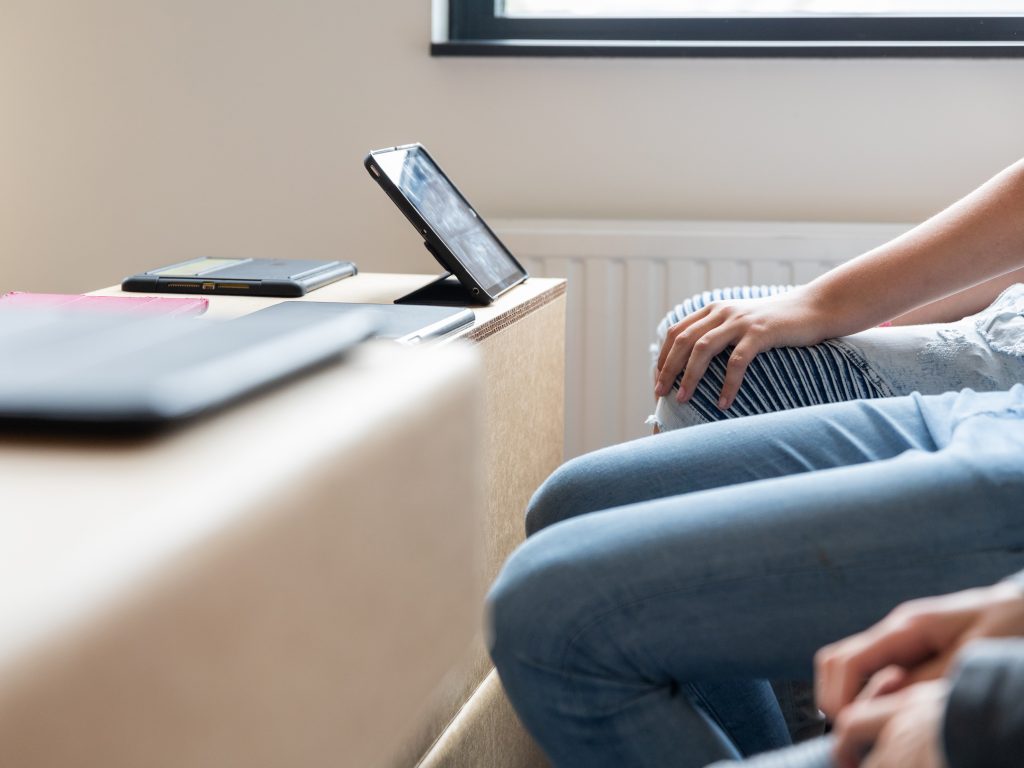 We held an interactive survey among colleagues and students (learning by doing), after which we facilitated a number of targeted workshops with the team. The directions became clear for the school to become an institution that best suits their education. These directions were in line with the goals they set for their education: socialization, personal development, qualification, and making your own choices.

As a next step we translated this into tangible innovations. It was all about the experiment and the process. The aim was to investigate the impact we could have.

Prototyping and co-creation in schools

We designed various prototypes. We made scale models out of cardboard and wood. Then we had furniture made to measure, also from cardboard and wood. In one of the two schools, we experimented with these prototypes with some added IKEA-products. We wanted to see if and how pupils would make the furniture ‘their own’, how the classes, interaction and collaboration would change. The testing was therefore expressly not about whether the furniture was comfortable (the human measure), but whether it had a positive effect on new ways of learning and teaching (the dynamics).

Always test. And test everything.
Only when you let the end-user test your prototypes, will you discover if and how they really work. Are they being used as you expected? Do they trigger what you intended? What unexpected things do you see happening? The students’ insights were refreshing. Adjustments are usually needed; working with prototypes of “cheap” materials accommodates that in a fast and budget-friendly way. Working in co-creation provides the quickest insights and results you are looking for.

Design thinking in the organization

The organization’s aim was to find a way to continuously think about and design the classroom of the future. In order to do that successfully, it is important to involve teachers and students. Without that involvement, it would mainly be about the colors and shapes of the interior; completely missing the bigger picture of the essence of education and ways that facilitate learning at its best.

In order to embed our approach and methods within the organization, we visualized the joint design process in the ‘PROEF! Book’. A handy document that illustrates and explains the project’s route (and the turns we took along the way). The book contains all the insights, opportunities, experiments, and results. The team can build on that and work on creating the classroom of the future on a daily basis. They now have the tools and techniques to use design thinking in shaping their education, now and in the future.

Test everything!
When you have the prototypes tested by the end-user, you will only find out how they really work. Are they used as you expected? Does it trigger what you meant? What unexpected things do you see happening? The students’ insights were refreshing. Almost always adjustments are needed, and working with prototypes of “cheap” materials can often make them fast and budget-friendly. Working in co-creation in this way provides the quickest insights and results you are looking for..

“What we tested with these prototypes was the effect they would have on education and learning.”

Design thinking creates and fosters meaningful innovation. It unpacks the mysterious connection between design and growth. Our non-linear, iterative processes challenge assumptions, redefine problems and create innovative solutions to prototype and test. Trust the process and uncover the right answers.

Design in
the service
of people